I Care A Lot Movie 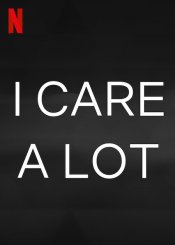 Follows Marla Grayson (Rosamund Pike), a highly successful legal guardian with a knack for exploiting the law to her financial benefit. After discovering her seemingly innocent new client (Dianne Wiest) harbors dangerous secrets, Marla and her partner (Eiza González) come to find they have unknowingly triggered a battle with a ruthless adversary (Peter Dinklage).

Poll: Will you see I Care A Lot?

Crew: Who's making I Care A Lot

I Care A Lot Trailers & Videos

Production: What we know about I Care A Lot

Production is scheduled to begin in June 2019.

I Care A Lot Release Date: When is it coming out?

I Care A Lot is coming out in 2021 on Friday, February 19, 2021 (Netflix release). There are 7 other movies coming out on the same date, including The Mauritanian, Nomadland and The Violent Heart.

Questions: Asked About I Care A Lot

Looking for more information on I Care A Lot?