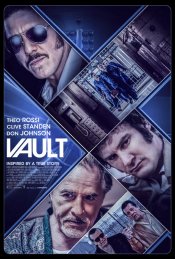 May 4, 2019 • Awaiting release by distributor; release date not yet announced.

The true story of one of the largest robberies in U.S. history. While doing time for a botched heist, two small-time crooks cook up an ill-fated scheme to rip off a nearby vault for $30 million - money that belongs to the local mafia.

Poll: Will you see Vault?

"The Oogieloves in the Big Balloon Adventure" , "Hoodwinked"

A look at the Vault behind-the-scenes crew and production team.

Production: What we know about Vault?

Vault Release Date: When is the film coming out?

Vault is coming out To Be Announced (TBA).

Looking for more information on Vault?