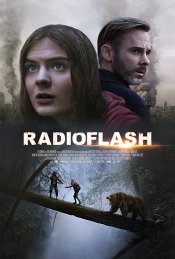 Teenage Reese (Brighton Sharbino) has a love for virtual reality role playing and a knack for beating even the toughest survival games. But when a nuclear strike causes an electromagnetic pulse that cuts off all power, water, and communication to the entire western United States, Reese finds herself plunged into an all-too-real fight to survive. As pandemonium grips her city, Reese and her father (Dominic Monaghan) set out on a desperate journey in search of safety—a perilous trek through a world gone mad where every encounter with a stranger could be your last. Propelled by the ingenuity and resilience of its young heroine, Radioflash is a harrowingly unpredictable apocalyptic thriller that speaks to our precarious present.

Poll: Will you see Radio Flash?

A look at the Radio Flash behind-the-scenes crew and production team.

Production: What we know about Radio Flash

Radio Flash Release Date: When was it released?

Radio Flash was released in 2019 on Friday, November 15, 2019 (Limited release). There were 13 other movies released on the same date, including Charlie's Angels, The Report and The Good Liar.

Who sings the song "What World Are You Living In" at the end of Radio Flash?