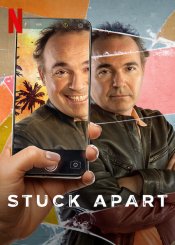 Entrenched in a midlife crisis, Aziz seeks solace from his mundane job, lonesome friends and rowdy family while pretending to have his act together.

Azizler depicts the story of Aziz, going through an existential crisis after longing his youth, he is not happy with his work nor his private life which is also hijacked by his sister and her family who have been living with him for some time now. His relationship with his girlfriend after 4 years is also not in the best place and he feels the desire to end that too! He wants his long-gone freedom back and when he least expects it he will soon come across a chance to rescue himself from the blackhole he’s trapped in. However he realizes this turns him into a pathological liar to a point there’s no turning back.

Poll: Will you see Stuck Apart?

A look at the Stuck Apart behind-the-scenes crew and production team.

Production: What we know about Stuck Apart

Stuck Apart Release Date: When was it released?

Stuck Apart was released in 2021 on Friday, January 8, 2021 (Netflix release). There were 10 other movies released on the same date, including One Night In Miami..., Redemption Day and Average Joe.