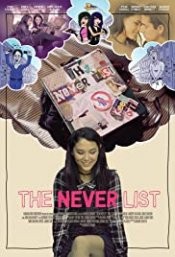 16-year old Eva (Fivel Stewart) is as overachieving as they come. Running for student class president while juggling a heavy academic schedule and planning the upcoming school dance, Eva dreams of becoming a comic book artist – something she knows her helicopter mom would never support. Since elementary school, Eva and her BFF Liz (Brenna D’Amico) have cosplayed their alter-egos, “Vicky” and “Veronica,” as a way to release the pressure they feel. Together, they imagine Vicky and Veronica doing highly questionable, even illegal, acts that the real Eva and Liz would never do... acts they document in “The Never List.” When Liz dies in a tragic accident, Eva is filled with anger and regret thinking about all the things Liz never did out of fear of risking her future… a future she ultimately would never have. Eva decides the best way to honor her best friend’s memory is to complete The Never List. At first this journey leads her to romance and adventure, but as the list progresses, her actions begin threatening the very foundations of her carefully planned teenage life and even her own future.

The Never List Release Date: When is it coming out?

The Never List is coming out in 2020 on Friday, December 11, 2020 (Limited release). There are 14 other movies coming out on the same date, including Canvas, Giving Voice and Safety.