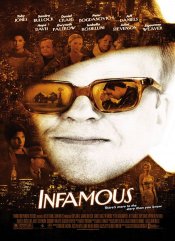 Based on the true story of young Truman Capote and his investigation into the 1959 murders of a wealthy Kansas family of four. What starts out as a journey with his childhood friend Harper Lee to figure out "whodunit," turns into something unexpected: an intense and complex bond with one of the murderers that inspired his greatest work, 'In Cold Blood.'

Poll: Will you see Infamous?

The Divergent Series: Allegiant, The Catcher Was A Spy

Marcel the Shell With Shoes On, Enemy

The Last Hangman, Being Julia

A look at the Infamous behind-the-scenes crew and production team.

Production: What we know about Infamous?

Infamous Release Date: When was the film released?

Infamous was released in 2006 on Friday, November 3, 2006 (). There were 3 other movies released on the same date, including Flushed Away, Santa Clause 3: Escape Clause and Borat: Cultural Learnings of America for Make Benefit Glorious Nation of Kazakhstan.

Looking for more information on Infamous?