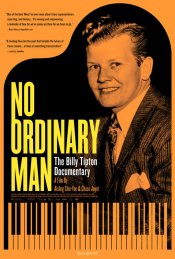 American jazz musician Billy Tipton developed a reputable touring and recording career in the mid-twentieth century, along with his band The Billy Tipton Trio. After his death in the late 80s, it was revealed that Tipton was assigned female at birth, and his life was swiftly reframed as the story of an ambitious woman passing as a man in pursuit of a music career.

Poll: Will you see No Ordinary Man?

A look at the No Ordinary Man behind-the-scenes crew and production team. The film's director Aisling Chin-Yee last directed The Rest of Us.

Production: What we know about No Ordinary Man?

No Ordinary Man Release Date: When was the film released?


No Ordinary Man was a Limited release in 2021 on Friday, July 16, 2021. There were 11 other movies released on the same date, including Die in a Gunfight, Space Jam: A New Legacy and Escape Room: Tournament of Champions.
As a Limited release, No Ordinary Man will only be shown in select movie theaters across major markets. Please check Fandango and Atom Tickets to see if the film is playing in your area.

No Ordinary Man DVD & Blu-ray Release Date: When was the film released?

Q&A Asked about No Ordinary Man

Looking for more information on No Ordinary Man?