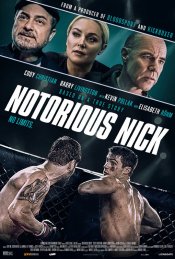 Even though he was born with a partial left arm, Nick Newell (Cody Christian) dreams of being a fighter. After wrestling in high school, Nick becomes a fierce competitor when his best friend, Abi, introduces him to mixed martial arts. Suddenly, a tragedy provides Nick with an unexpected opportunity, but to succeed he must commit to becoming the fighter he always hoped to be.

Poll: Will you see Notorious Nick?

A look at the Notorious Nick behind-the-scenes crew and production team. The film's writer Josh Campbell last wrote The Killer.

Production: What we know about Notorious Nick?

Notorious Nick Release Date: When is the film coming out?

Notorious Nick is coming out in 2021 on Friday, August 6, 2021 (Limited release). There are 15 other movies coming out on the same date, including The Suicide Squad, 6:45 and Naked Singularity.