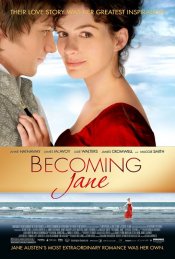 Before becoming a famous novelist, a young Jane Austen becomes embroiled in a passionate love affair with an Irish lawyer, Tom Lefroy, that inspires her career.

The year is 1795 and young Jane Austen is a feisty 20-year-old and emerging writerwho already sees a world beyond class and commerce, beyond pride and prejudice, and dreams of doing what was then nearly unthinkable--marrying for love. Naturally, her parents are searching for a wealthy, well-appointed husband to assure their daughter''s future social standing. They are eyeing Mr. Wisley, nephew to the very formidable, not to mention very rich, local aristocrat Lady Gresham, as a prospective match. But when Jane meets the roguish and decidedly non-aristocratic Tom Lefroy, sparks soon fly along with the sharp repartee. His intellect and arrogance raise her ire--then knock her head over heels. Now, the couple, whose flirtation flies in the face of the sense and sensibility of the age, is faced with a terrible dilemma. If they attempt to marry, they will risk everything that matters--family, friends and fortune.

Poll: Will you see Becoming Jane?

Production: What we know about Becoming Jane

Becoming Jane Release Date: When was it released?

Becoming Jane was released in 2007 on Friday, August 3, 2007 (). There were 5 other movies released on the same date, including El Cantante, The Bourne Ultimatum and Bratz: The Movie.