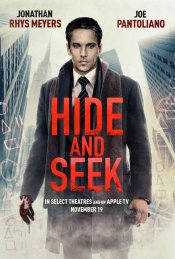 September 18, 2021 • Awaiting release by distributor; release date not yet announced.

After the death of his wealthy father, Noah seeks his outcast brother to make amends and share the family fortune. But the family harbors a dark secret and a series of cryptic clues will lead Noah on a terrifying trail to the truth that threatens to tear him apart from the ones he loves the most.

Poll: Will you see Hide and Seek?

"Bad Boys for Life" , "The Feast of Seven Fishes"

Production: What we know about Hide and Seek?

Hide and Seek Release Date: When is the film coming out?

Hide and Seek is coming out To Be Announced (TBA).

Q&A Asked about Hide and Seek

Looking for more information on Hide and Seek?