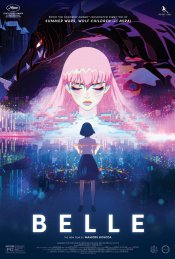 A fantastical, heartfelt story of growing up in the age of social media.

Suzu is a shy, everyday high school student living in a rural village. For years, she has only been a shadow of herself. But when she enters “U”, a massive virtual world, she escapes into her online persona as Belle, a gorgeous and globally-beloved singer. One day, her concert is interrupted by a monstrous creature chased by vigilantes. As their hunt escalates, Suzu embarks on an emotional and epic quest to uncover the identity of this mysterious “beast” and to discover her true self in a world where you can be anyone.

Poll: Will you see Belle?

Eloise, What to Expect When You're Expecting

Mortal Kombat Legends: Snow Blind, I Want You Back

The Hunger Games: The Ballad of Songbirds and Snakes, Cuckoo

Production: What we know about Belle?

Belle Release Date: When was the film released?


Belle was a Limited release in 2022 on Friday, January 14, 2022. There were 15 other movies released on the same date, including Scream, Hotel Transylvania: Transformania and Borrego.
As a Limited release, Belle will only be shown in select movie theaters across major markets. Please check Fandango and Atom Tickets to see if the film is playing in your area.

Looking for more information on Belle?