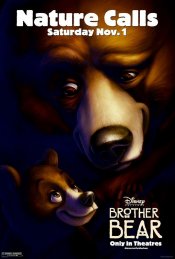 In a tiny village, when the Earth was young and ice still covered the land, a headstrong teenager, Kenai, has an issue with bears. And why not -- the bears compete for the same food and land, loot his village, and ruin his coming of age ceremony. When his oldest brother is lost in a perilous battle with a ferocious grizzly, Kenai ignores the village teachings of brotherhood, choosing instead to track down the bear and satisfy his thirst for vengeance. Kenai, voiced by Joaquin Phoenix, is changed into a bear by the Great Spirits, forcing him to examine the world through the eyes of his enemy. In his quest to regain his human form, Kenai enlists the help of an adorable, talkative and sometimes-pesky bear cub named Koda. Their journey propels them across the northern territory, through glacial caverns, frosty tundra, a valley of fire and treacherous gorges. Over the course of the journey with Koda, Kenai is forced to question everything he knows and learns many important lessons about the true meaning of brotherhood. Ultimately, he realizes that his physical transformation from a man to a bear is insignificant compared to the change that has occurred within him.

Poll: Will you see Brother Bear?

A look at the Brother Bear behind-the-scenes crew and production team. The film's director Aaron Blaise last directed The Legend of Tembo.

Production: What we know about Brother Bear?

Brother Bear Release Date: When was the film released?