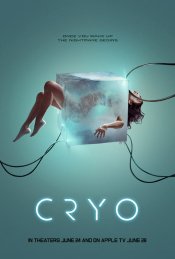 Sometimes the real nightmare is being awake. Five scientists awake from a cryogenic sleep and find themselves trapped in an underground facility. With no memory of who they are or how long they've been asleep, they begin to realize they may have been part of a scientific experiment gone wrong. After a series of strange events, the scientists find themselves being hunted. They do not know who is hunting them or for what reason, but the scientists begin to suspect that one of them may be the killer.

Poll: Will you see Cryo?

The Appearance, The Best Two Years

A look at the Cryo behind-the-scenes crew and production team.

Production: What we know about Cryo?

Cryo Release Date: When was the film released?

Cryo was released in 2022 on Friday, June 24, 2022 (Limited release). There were 12 other movies released on the same date, including Elvis, The Black Phone and Marcel the Shell With Shoes On.

Looking for more information on Cryo?