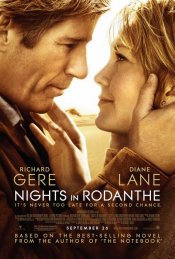 A doctor begins a life-altering romance that starts when he stops at an inn on his way to see his estranged son.

Adrienne Willis (Diane Lane), a woman with her life in chaos, retreats to the tiny coastal town of Rodanthe, in the Outer Banks of North Carolina, to tend to a friend's inn for the weekend. Here she hopes to find the tranquility she so desperately needs to rethink the conflicts surrounding her—a wayward husband who has asked to come home, and a teenaged daughter who resents her every decision. Almost as soon as Adrienne gets to Rodanthe, a major storm is forecast and Dr. Paul Flanner (Richard Gere) arrives. The only guest at the inn, Flanner is not on a weekend escape but rather is there to face his own crisis of conscience. Now, with the storm closing in, the two turn to each other for comfort and, in one magical weekend, set in motion a life-changing romance that will resonate throughout the rest of their lives.

Poll: Will you see Nights in Rodanthe?

Crew: Who's making Nights in Rodanthe

A look at the Nights in Rodanthe behind-the-scenes crew and production team. The film's writer Ann Peacock last wrote The First Grader and Kit Kittredge: An American Girl.

Production: What we know about Nights in Rodanthe

Nights in Rodanthe Release Date: When was it released?

Nights in Rodanthe was released in 2008 on Friday, September 26, 2008 (). There were 6 other movies released on the same date, including Eagle Eye, The Lucky Ones and Forever Strong.

Questions: Asked About Nights in Rodanthe

Looking for more information on Nights in Rodanthe?