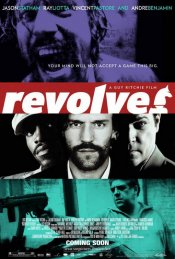 Hotshot Las Vegas gambler Jake Green is rarely allowed to play in the casinos because he's a winner. Jake has taken in so much money, in fact, that he's the only client of his accountant and older brother, Billy. Jake, Billy and their other brother Joe are invited to sit in on a private game. Crime boss and casino owner, Dorothy Macha is sitting in on the game, too. Though he's a terrible player he always wins because people are scared to lose to him. Jake not only beats Dorothy but insults the man. Macha puts out a hit on Jake, but Jake ends up working for and being protected by a pair of brothers, Avi and Zack, who are out to take Dorothy down.

Poll: Will you see Revolver?

Revolver Cast: Who are the actors?

Production Timeline: When did the Revolver come together?

Revolver Release Date: When was it released?

Revolver was released in 2007 on Friday, December 7, 2007 There were 5 other movies released on the same date, including Grace is Gone, Atonement and The Golden Compass.

Looking for more information on Revolver