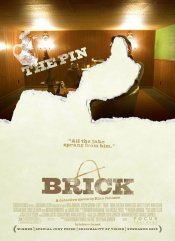 "Brick" is a detective story set in a strange sort of high school world. Its primary inspiration are the novels of Dashiell Hammet. Its main character (Brendan Frye) is a loner at his high school, someone who knows all the angles but has chosen to stay on the outside. When the girl he loves turns up dead, he plunges into the school's social strata like a fist through a honeycomb to find the who and why, with the same single minded devotion to his self appointed task as Hammet's anti-heros.

Poll: Will you see Brick?

Production: What we know about Brick

Brick Release Date: When was it released?

Looking for more information on Brick?