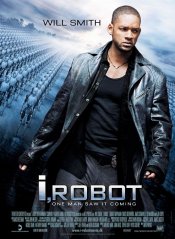 Will Smith stars in this action thriller inspired by the classic short story collection by Isaac Asimov and brought to the big screen by director Alex Proyas ("Dark City", "The Crow"). In the year 2035, robots are an everyday household item and everyone trusts them, except one slightly paranoid detective (Will Smith) investigating what he alone believes is a crime perpetrated by a robot. The case leads him to discover a far more frightening threat to the human race.

Poll: Will you see I, Robot?

Emancipation, I Am Legend 2

Wish, Raya and the Last Dragon

Indiana Jones and the Kingdom of the Crystal Skull, Nymphomaniac: Part One

Star Trek Into Darkness, Below

The Terminal, Beavis and Butt-Head Do the Universe

Production: What we know about I, Robot?

I, Robot Release Date: When was the film released?


I, Robot was a release in 2004 on Friday, July 16, 2004. There were 5 other movies released on the same date, including De-Lovely, A Cinderella Story and Flavors.

I, Robot DVD & Blu-ray Release Date: When was the film released?

Q&A Asked about I, Robot

Looking for more information on I, Robot?