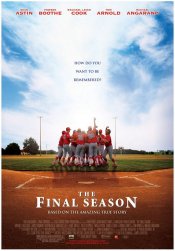 A high school baseball coach motivates a hangdog team to win one last season before being merged into a larger school district.

In the small town of Norway, Iowa, everyone comes together for high school baseball. But life throws curve balls; and the passionate young players, rookie coach Kent Stock, and the hometown fans find that life's greatest challenges strike off the diamond.

Poll: Will you see The Final Season?

Crew: Who's making The Final Season

Production: What we know about The Final Season

The Final Season Release Date: When was it released?

The Final Season was released in 2007 on Friday, October 12, 2007 (). There were 6 other movies released on the same date, including Tyler Perry's Why Did I Get Married?, Across the Universe and Elizabeth - The Golden Age.

Questions: Asked About The Final Season

Looking for more information on The Final Season?