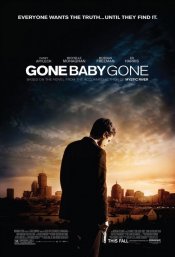 Two private-eyes risk everything to investigate a missing child in a territory of broken families, bitter cops and whacked out ex-cons.

Two young private detectives are hired to take a closer look at the mysterious disappearance of a little girl and soon discover that nothing is what it seems. Ultimately, they will have to risk everything -- their relationship, their sanity, and even their lives -- to find a little girl-lost.

Nanny, The Best of Me

A Good Person, The Minute You Wake Up Dead

Production: What we know about Gone, Baby, Gone?

Gone, Baby, Gone Release Date: When was the film released?


Gone, Baby, Gone was a release in 2007 on Friday, October 19, 2007. There were 5 other movies released on the same date, including Reservation Road, Things We Lost in the Fire and Rendition.