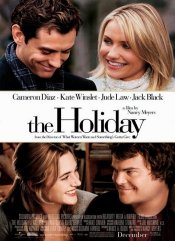 A woman has man trouble until she crosses paths with a woman from a small English village with a similar dilemma.

In writer/director Nancy Meyers' "The Holiday", two women on opposite sides of the globe, Amanda Woods (Cameron Diaz) and Iris Simpkins (Kate Winslet) find themselves in a similar predicament. Desperate for a change of scenery, the two women meet on the internet and swap houses for the Christmas holiday discovering that a change of address really can change your life. In addition to Diaz and Winslet, "The Holiday" also stars Jude Law, Jack Black, Eli Wallach, Edward Burns and Rufus Sewell.

Poll: Will you see The Holiday?

Crew: Who's making The Holiday

Production: What we know about The Holiday

The Holiday Release Date: When was it released?

The Holiday was released in 2006 on Friday, December 8, 2006 (). There were 4 other movies released on the same date, including Blood Diamond, Apocalypto and Breaking and Entering.

Questions: Asked About The Holiday

Looking for more information on The Holiday?