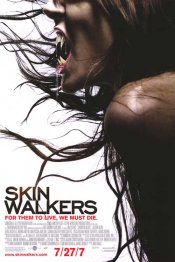 In the small town of Huguenot, Timothy approaches his thirteenth birthday, unaware this milestone marks the time of his transformation. His mother Rachel fears her son's health is deteriorating. But those around him—those who have guarded him since birth—know Timothy is a half-blood and that when the red moon is full, he will finally have the power to control his family's destiny. They also know that Timothy's gift puts his life in grave danger. Meanwhile, two packs of Skinwalkers watch the night sky. Bound by blood, divided by principles, and hellbent to survive, they understand that this rising moon signals the fulfillment of an ancient prophecy. Consequently, the packs are prepared to wage a fierce battle for possession of the one who holds the key to their future and their way of life.

Poll: Will you see Skinwalkers?

The Grudge, The Tattooist

Let Me In, The Curious Case of Benjamin Button

Underworld: Rise of the Lycans, The Other Me

See for Me, Silent Hill

A look at the Skinwalkers behind-the-scenes crew and production team. The film's writer James DeMonaco last wrote The Forever Purge and The First Purge.

Production: What we know about Skinwalkers?

Skinwalkers Release Date: When was the film released?

Skinwalkers was released in 2007 on Friday, August 10, 2007 (). There were 6 other movies released on the same date, including Rush Hour 3, Stardust and The Walker.

Looking for more information on Skinwalkers?