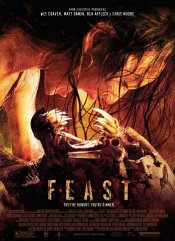 One evening at a rural bar, a motley bunch of patrons struggle to survive a ravenous family of flying beasts bent on eating all of them.

Poll: Will you see Feast?

The Tripper, Bottoms Up

Production: What we know about Feast?

Feast Release Date: When was the film released?


Feast was a release in 2006 on Friday, September 22, 2006. There were 4 other movies released on the same date, including Running With Scissors, For Your Consideration and Jackass Number Two.

Feast DVD & Blu-ray Release Date: When was the film released?

Looking for more information on Feast?