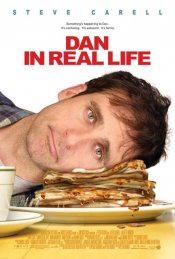 A widower finds out the woman he fell in love with is his brother's girlfriend.

The story centers on a widower with three daughters, ages 10-17, who writes a parenting column for a local paper. While on a family reunion on the Jersey shore, he meets a woman he takes a liking to, but upon returning home, he finds out the woman is his brother's girlfriend. He then tries desperately not to fall in love with her while not breaking rules he has set up for himself and his daughters.

Poll: Will you see Dan in Real Life?

A look at the Dan in Real Life behind-the-scenes crew and production team. The film's director Peter Hedges last directed Ben Is Back and The Odd Life of Timothy Green. The film's writer Pierce Gardner last wrote Why Don't You Try Me?.

Production: What we know about Dan in Real Life

Dan in Real Life Release Date: When was it released?

Dan in Real Life was released in 2007 on Friday, October 26, 2007 (). There were 2 other movies released on the same date, including Before the Devil Knows You're Dead and Saw IV.

Looking for more information on Dan in Real Life?