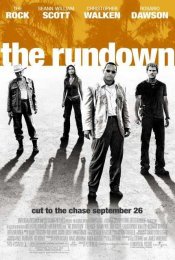 When Travis (Seann William Scott), the son of an underworld kingpin, disappears in the Amazon in search of a priceless artifact, Beck (The Rock), the kingpin's retrieval expert, is sent to get him. Despite their hostility - and their love for the same woman (Rosario Dawson) - the two must eventually join forces to fight the evil head (Christopher Walken) of a gold-mining corporation who is after the same treasure.

Poll: Will you see The Rundown?

Crew: Who's making The Rundown

Production: What we know about The Rundown

The Rundown Release Date: When was it released?

The Rundown was released in 2003 on Friday, September 26, 2003 (). There were 3 other movies released on the same date, including National Lampoon's Dorm Daze, Luther and Duplex.

Questions: Asked About The Rundown

Looking for more information on The Rundown?