Man of the Year Movie 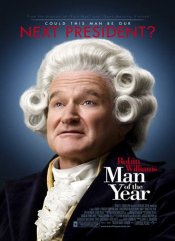 On a lark, the host of a late-night political talk show decides to run for president. The thing is, he never expected to win.

Robin Williams will play a Jon Stewart-like host of a latenight political talkshow who runs for president to make noise on the campaign trail. The stunt backfires after a series of unusual circumstances leads him to victory.

Poll: Will you see Man of the Year?

Who stars in Man of the Year: Cast List

Happy Feet Two, Night at the Museum: Secret of the Tomb

Inside Out, Better Off Single

Production: What we know about Man of the Year?

Man of the Year Release Date: When was the film released?

Man of the Year was released in 2006 on Friday, October 13, 2006 (). There were 3 other movies released on the same date, including Marie-Antoinette, The Marine and Driving Lessons.

Q&A Asked about Man of the Year

Looking for more information on Man of the Year?