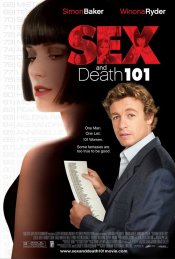 The story follows a man (Baker) whose life is upended by a mysterious e-mail containing the names of every woman he has had sex with and, eerily, every woman he will have sex with in the future.

Deep Water, Before I Wake

About My Father, Meeting Evil

A look at the Sex and Death 101 behind-the-scenes crew and production team.

Production: What we know about Sex and Death 101?

Sex and Death 101 Release Date: When was the film released?

Looking for more information on Sex and Death 101?