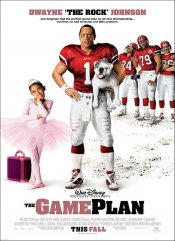 A superstar NFL quarterback and committed bachelor's life changes when he discovers he's a father. He learns this when an ex-girlfriend dies and her 7-year-old daughter shows up on his doorstep because his name is on the birth certificate. The two slowly bond.

A story centered around a rugged superstar quarterback Joe Kingman, whose Boston-based team is chasing a championship. A 'serial bachelor', Kingman is living the ultimate fantasy: he's rich, famous and the life of the party. But this dream is suddenly sacked for a loss when he discovers the 7-year-old daughter he never knew he had--the product of a final fling he had, years prior, before parting ways with his young wife. Now, during the most important time in his career, he must figure out how to juggle his parties, practices and dates with the newfound ballet classes, bedtime stories and dolls that come with his daughter. Equally perplexed is his hard-edged mega-agent, Stella, herself without a parental bone in her body. Despite the often comedic misadventures that come with being a new father, Joe discovers that there's more to life than money, endorsements and thousands of adoring fans: the love and care of one very special small fan is the only thing that matters.

Poll: Will you see The Game Plan?

Crew: Who's making The Game Plan

A look at the The Game Plan behind-the-scenes crew and production team.

Production: What we know about The Game Plan

The Game Plan Release Date: When was it released?

The Game Plan was released in 2007 on Friday, September 28, 2007 (). There were 5 other movies released on the same date, including The Itty Bitty Titty Committee, The Kingdom and The Seeker: The Dark is Rising.

Questions: Asked About The Game Plan

Looking for more information on The Game Plan?