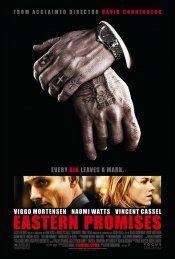 The mysterious and ruthless Nikolai is tied to one of London's most notorious organized crime families. His carefully maintained existence is jarred when he crosses paths with Anna, an innocent midwife trying to right a wrong, who accidentally uncovers potential evidence against the family. Now Nikolai must put into motion a harrowing chain of murder, deceit, and retribution.

Poll: Will you see Eastern Promises?

Production: What we know about Eastern Promises

Eastern Promises Release Date: When was it released?

Eastern Promises was released in 2007 on Friday, September 14, 2007 (). There were 6 other movies released on the same date, including In the Valley of Elah, Dedication and Mr. Woodcock.