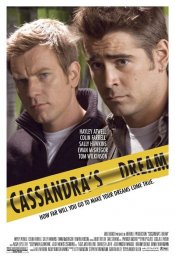 Set in contemporary London, "Cassandra's Dream" is a powerful and thrilling story about two brothers (Ewan McGregor, Colin Farrell) who are desperate to better their troubled lives. One is a chronic gambler in debt over his head, and the other is a young man in love with a beautiful actress (newcomer Hayley Atwell) he has recently met. Their lives gradually become entangled into a sinister situation with intense and unfortunate results.

Poll: Will you see Cassandra's Dream?

Production: What we know about Cassandra's Dream

Cassandra's Dream Release Date: When was it released?

Cassandra's Dream was released in 2008 on Friday, January 18, 2008 (). There were 4 other movies released on the same date, including 27 Dresses, Cloverfield and Teeth.