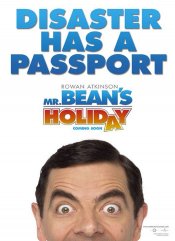 The film finds the hapless Mr. Bean travelling to the South of France on holiday, causing the usual mayhem and ending with an unscheduled screening of his video diary at the Cannes Film Festival.

Rowan Atkinson returns to the iconic role that made him an international star in "Bean II". In his latest misadventure, Mr. Bean--the nearly wordless misfit who seems to be followed by a trail of pratfalls and hijinks--goes on holiday to the French Riviera and becomes ensnared in a European adventure of cinematic proportions.

Tired of the dreary, wet London weather, Bean packs up his suitcase and camcorder to head to Cannes for some sun on the beach. Ah...vacation. But his trip doesn't go as smoothly as he had hoped when the bumbling Bean falls face first into a series of mishaps and fortunate coincidences, far-fetched enough to make his own avant-garde film.

Wrongly thought to be both kidnapper and acclaimed filmmaker, he has some serious explaining to do after wreaking havoc across the French countryside and arriving at his vacation spot with a Romanian filmmaker's precocious son and an aspiring actress in tow. Will Bean be arrested by the gendarmes or end up winning the Palme d'Or? It's all caught on camera as Atkinson again applies his awkward athleticism to a comedy of errors in "Bean II".

Spider-Man: No Way Home, Dead For A Dollar

The Science of Sleep, The Diving Bell and the Butterfly

The Artist and the Model, Lost in La Mancha

Production: What we know about Mr. Bean's Holiday?

Mr. Bean's Holiday Release Date: When was the film released?

Mr. Bean's Holiday was released in 2007 on Friday, August 24, 2007 (). There were 5 other movies released on the same date, including Illegal Tender, Resurrecting the Champ and War.