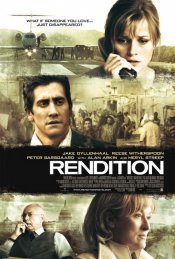 Reese Witherspoon is the wife of an Egyptian-born chemical engineer, who is being held by the CIA as a terrorist suspect.

A thriller that centers on Isabella El-Ibrahimi, the American wife of Egyptian-born chemical engineer Anwar El-Ibrahimi, who disappears on a flight from South Africa to Washington. Isabella desperately tries to track her husband down, while a CIA analyst at a secret detention facility outside the U.S. is forced to question his assignment as he becomes party to the man's unorthodox interrogation.

Poll: Will you see Rendition?

A look at the Rendition behind-the-scenes crew and production team. The film's director Gavin Hood last directed Official Secrets and Eye in the Sky.

Production: What we know about Rendition

Rendition Release Date: When was it released?

Rendition was released in 2007 on Friday, October 19, 2007 (). There were 5 other movies released on the same date, including The Comebacks, Things We Lost in the Fire and Reservation Road.

Looking for more information on Rendition?