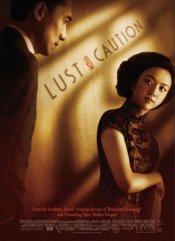 Lust, Caution is an espionage thriller set in WWII-era Shanghai, centering around Mr. Yee, a powerful political figure and Wang Jiazhi, the young woman who gets swept up in a dangerous game of emotional intrigue with him.

Shanghai, 1942. The World War II Japanese occupation of this Chinese city continues in force. Mrs. Mak, a woman of sophistication and means, walks into a cafe, places a call, and then sits and waits. She remembers how her story began several years earlier, in 1938 China. She is not in fact Mrs. Mak, but shy Wong Chia Chi. With WWII underway, Wong has been left behind by her father, who has escaped to England. As a freshman at university, she meets fellow student Kuang Yu Min. Kuang has started a drama society to shore up patriotism. As the theater troupe's new leading lady, Wong realizes that she has found her calling, able to move and inspire audiences--and Kuang. He convenes a core group of students to carry out a radical and ambitious plan to assassinate a top Japanese collaborator, Mr. Yee. Each student has a part to play; Wong will be Mrs. Mak, who will gain Yee's trust by befriending his wife and then draw the man into an affair. Wong transforms herself utterly inside and out, and the scenario proceeds as scripted--until an unexpectedly fatal twist spurs her to flee. Shanghai, 1941. With no end in sight for the occupation, Wong--having emigrated from Hong Kong--goes through the motions of her existence. Much to her surprise, Kuang re-enters her life. Now part of the organized resistance, he enlists her to again become Mrs. Mak in a revival of the plot to kill Yee, who as head of the collaborationist secret service has become even more a key part of the puppet government. As Wong reprises her earlier role, and is drawn ever closer to her dangerous prey, she finds her very identity being pushed to the limit...

Poll: Will you see Lust, Caution?

A look at the Lust, Caution behind-the-scenes crew and production team.

Production: What we know about Lust, Caution

Lust, Caution Release Date: When was it released?

Lust, Caution was released in 2007 on Friday, September 28, 2007 (). There were 5 other movies released on the same date, including The Game Plan, December Boys and The Itty Bitty Titty Committee.