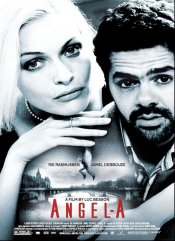 A moralistic tale about a man, Andre, who gets a second chance in life when he meets Angela, a tall, femme fatale whom he saves from a suicide bid in the Seine River. The two spend a memorable summer night in nearly deserted Paris where Angela exposes herself as a true angel, sent down to save Andre from himself.

Poll: Will you see Angel-A?

Production: What we know about Angel-A?

Angel-A Release Date: When was the film released?

Looking for more information on Angel-A?