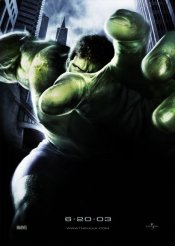 Poll: Will you see Hulk?

A Star Is Born, Barnyard

Ford v Ferrari, Life As We Know It

A look at the Hulk behind-the-scenes crew and production team.

Production: What we know about Hulk?

Hulk Release Date: When was the film released?

Hulk was released in 2003 on Friday, June 20, 2003 (). There were 3 other movies released on the same date, including The Legend of Suriyothai, Alex & Emma and From Justin to Kelly.

Looking for more information on Hulk?