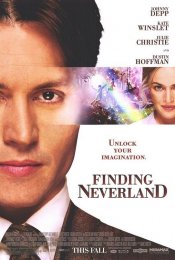 It all begins as successful Scottish playwright J.M. Barrie watches his latest play open to a ho-hum reaction among the polite society of Edwardian England. A literary genius of his times but bored by the same old themes, Barrie is clearly in need of some serious inspiration. Unexpectedly, he finds it one day during his daily walk with his St. Bernard Porthos in London's Kensington Gardens. There, Barrie encounters the Llewelyn Davies family: four fatherless boys and their beautiful, recently widowed mother. Despite the disapproval of the boys' steely grandmother Emma du Maurier and the resentment of his own wife, Barrie befriends the family, engaging the boys in tricks, disguises, games and sheer mischief, creating play-worlds of castles and kings, cowboys and Indians, pirates and castaways. He transforms hillsides into galleon ships, sticks into mighty swords, kites into enchanted fairies and the Llewelyn Davies boys into "The Lost Boys of Neverland." From the sheer thrills and adventurousness of childhood will come Barrie's most daring and renowned masterwork, "Peter Pan." At first, his theatrical company is skeptical. While his loyal producer Charles Frohman worries he'll lose his shirt on this children's fantasy, Barrie begins rehearsals only to shock his actors with such unprecedented requests as asking them to fly across the stage, talk to fairies made out of light and don dog and crocodile costumes. Then, just as Barrie is ready to introduce the world to "Peter Pan," a tragic twist of fate will make the writer and those he loves most understand just what it means to really believe.

Poll: Will you see Finding Neverland?

A look at the Finding Neverland behind-the-scenes crew and production team. The film's director Marc Forster last directed Disney's Christopher Robin and All I See Is You. The film's writer David Magee last wrote Mary Poppins Returns and Life of Pi.

Production: What we know about Finding Neverland

Finding Neverland Release Date: When was it released?

Finding Neverland was released in 2004 on Friday, October 22, 2004 (). There were 5 other movies released on the same date, including The Machinist, Celsius 41.11 and Surviving Christmas.