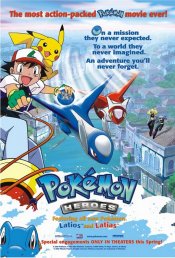 Ash and Pikachu travel to the Water Capital of the world, Alto Mare, where they meet two new Pokemons, the brother/sister pair of birds called Latias and Latios who protect a treasure called the Droplet of the Heart, which is the target of a pair of thieves, Zanna and Rion. As the town gets accidentally flooded, the Droplet becomes endangered... can Ash save the day?

Poll: Will you see Pokemon Heroes?

Yu-Gi-Oh! The Dark Side of Dimensions, Yu-Gi-Oh!

A look at the Pokemon Heroes behind-the-scenes crew and production team.

Production: What we know about Pokemon Heroes?

Pokemon Heroes Release Date: When was the film released?

Pokemon Heroes was released in 2003 on Friday, May 16, 2003 (). There were 3 other movies released on the same date, including Down with Love, L'Auberge Espagnole and Sweet Sixteen.