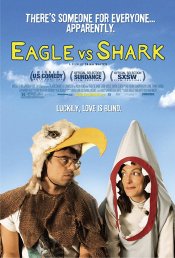 "Eagle Vs. Shark", directed by Academy Award-nominee Taika Waititi (the short, "Two Cars One Night"), is a wry comedy that chronicles the quirky romance of two awkward misfits, Lily (Loren Horsley), a shy fast-food restaurant cashier, and her crush, Jarrod (Jemaine Clement, HBO's "One Night Stand: The Flight of the Conchords"), an electronic store clerk. On the day Lily gets fired from her job at Meaty Boy, she musters up the courage to attend Jarrod's annual "come as your favorite animal" costume party. The dressy affair sparks the beginnings of a romance as well a small journey for the pair to Jarrod's quiet hometown, in which Jarrod plans to seek revenge on an old nemesis and where Lily unwittingly finds herself stranded amongst Jarrod's family of eccentrics.

Poll: Will you see Eagle vs. Shark?

Crew: Who's making Eagle vs. Shark

A look at the Eagle vs. Shark behind-the-scenes crew and production team.

Production: What we know about Eagle vs. Shark

Eagle vs. Shark Release Date: When was it released?

Questions: Asked About Eagle vs. Shark

Looking for more information on Eagle vs. Shark?