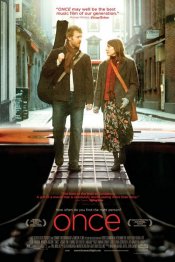 The Guy works part-time helping his father, who runs a small, vacuum cleaner repair business, but dreams of having his songs recorded and landing a record deal. His girlfriend has recently left him and gone to London, and he is still coming to grips with that loss and is emotionally vulnerable.

One day while busking on Dublin's Grafton Street, he meets the Girl, an East European immigrant who has moved to Dublin to start a new life for herself and currently works as a house cleaner in an upper-class residence. She is struggling financially, and cannot afford the piano she yearns for, and is also in the process of making crucial decisions about her personal life. In a Dublin that has grown increasingly affluent and materialistic during Ireland's unprecedented economic boom, they are both outsiders, struggling with their art and their hearts. Through music, they find a common bond that brings them effortlessly together.

As the Guy and the Girl get to know each other over the course of an intense few days, their relationship blossoms as they share their music, put together a band to rehearse songs and record some demos, all of which results in them bringing some much-needed impetus to their artistic and personal lives.

Poll: Will you see Once?

Crew: Who's making Once

Production: What we know about Once

Once Release Date: When was it released?

Questions: Asked About Once

Looking for more information on Once?