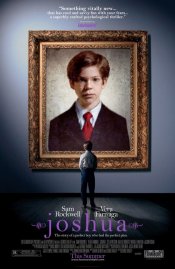 The tale of Brad and Abby Cairn, perfect Manhattan parents in a perfect Manhattan apartment whose perfect life begins to crack after the birth of their second child Lily. Shortly after Lily arrives home, a dark side of prodigy son Joshua slowly begins to reveal itself.

Poll: Will you see Joshua?

Production: What we know about Joshua

Joshua Release Date: When was it released?

Looking for more information on Joshua?