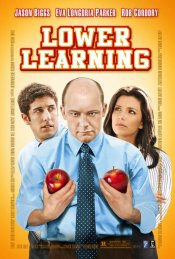 A comedy set in an elementary school.

Welcome to Geraldine Ferraro Elementary, where the teachers are drunk, lazy or psychotic, every child has been left behind, and burned-out Vice Principal Tom Willoman (Jason Biggs) is barely holding on. But when totally hot district inspector Rebecca Seabrook (Eva Longoria Parker) arrives to shut down the school, she and Tom hatch a plan to take back the classrooms from insanely corrupt Principal Billings (Rob Corddry). What tragedy in Willoman’s past has turned him into a complete wuss? When are Nyquil shots and boxing matches considered proper teaching tools? How much damage can be inflicted by a bunch of pissed-off 2nd graders? Monica Potter, and Will Sasso co-star in this twisted comedy about the perils of public education and the higher calling to "Lower Learning".

Poll: Will you see Lower Learning?

A look at the Lower Learning behind-the-scenes crew and production team.

Production: What we know about Lower Learning

Lower Learning Release Date: When was it released?