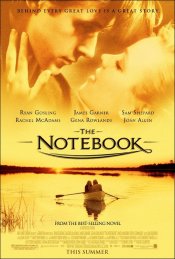 Based on the acclaimed best seller by Nicholas Sparks and directed by Nick Cassavetes ("John Q")," The Notebook" is a sweeping love story starring Academy Award nominees James Garner, Gena Rowlands and Joan Allen opposite newcomers Ryan Gosling ("Murder by Numbers") and Rachel McAdams. As a man (Garner) reads from a faded notebook to the woman (Rowlands) he regularly visits at a nursing home, his words bring to life the story of a young couple (Gosling and McAdams) who are separated by World War II, then passionately reunited 14 years later after their lives have taken different paths. Adapted by Jan Sardi with a screenplay by Jeremy Leven (Don Juan DeMarco), "The Notebook" reveals an epic story of love lost and found, of new beginnings and second chances.

Poll: Will you see The Notebook?

"The Bourne Legacy" , "Who Will Write Our History"

"Doctor Strange in the Multiverse of Madness" , "Aloha"

A look at the The Notebook behind-the-scenes crew and production team. The film's director Nick Cassavetes last directed Yellow and The Other Woman. The film's writer Mark Andrus last wrote Otherhood and And So It Goes.

Production: What we know about The Notebook?

The Notebook Release Date: When was the film released?

The Notebook was released in 2004 on Friday, June 25, 2004 (). There were 4 other movies released on the same date, including Fahrenheit 911, Two Brothers and White Chicks.

Q&A Asked about The Notebook

Looking for more information on The Notebook?