January 4, 2020 • Filming completed; editing of shot film; music composition and recordings, as well as sound and visual effects being added. Releasing on Netflix in March 2020 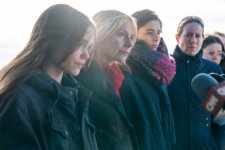 Police inaction drives Mari Gilbert (Amy Ryan) to investigate the disappearance of her daughter. Mari's search of the gated community where Shannan was last seen brings attention to over a dozen murdered sex workers.

Poll: Will you see Lost Girls?

Production: What we know about Lost Girls

Releasing on Netflix in March 2020

Lost Girls Release Date: When is it coming out?