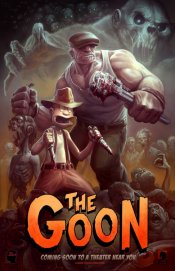 Set in a 30's style noir world filled with ghosts, ghouls, skunk-apes, extra-dimensional aliens, and mad scientists, a muscle-bound brawler claims to be the primary enforcer for the feared mobster Labrazio. The Goon and his sidekick Franky get involved in various machinations, often in relation to the evil zombie gangs under the command of the Nameless Zombie Priest.

Poll: Will you see The Goon?

"Promising Young Woman" , "The SpongeBob Movie: Sponge on the Run"

A look at the The Goon behind-the-scenes crew and production team.

Production: What we know about The Goon?

The Goon Release Date: When is the film coming out?

The Goon is coming out To Be Announced (TBA).

Q&A Asked about The Goon

Looking for more information on The Goon?