My Name is Bruce Movie 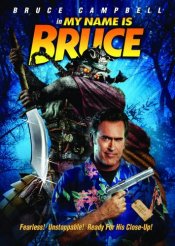 In "My Name is Bruce," Campbell is mistaken for his character Ash from the Evil Dead trilogy and forced to fight a real monster - a nine-foot-tall sword-wielding Chinese god of war - in a small town in Oregon. Mortified at first, Campbell decides to enjoy his stab at protecting the innocent until the situation turns decidedly gruesome. Confronted by a monster that’s not a guy in a rubber suit, and with the blood of innocents on his hands, Bruce must abandon his slothful Hollywood ways. In a climactic, mano-a-monster battle, he is forced to finally rise to the occasion and become a hero…in real life.

Poll: Will you see My Name is Bruce?

Crew: Who's making My Name is Bruce

A look at the My Name is Bruce behind-the-scenes crew and production team. The film's director Bruce Campbell last directed Bruce Vs. Frankenstein. The film's writer Mark Verheiden last wrote Teen Titans GO To the Movies and The Ark.

My Name is Bruce Trailers & Videos

Production: What we know about My Name is Bruce

My Name is Bruce Release Date: When was it released?

Questions: Asked About My Name is Bruce

Looking for more information on My Name is Bruce?