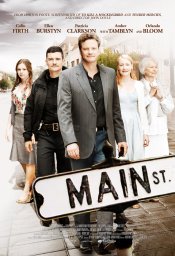 Set in Durham, North Carolina, the story of a decaying small town and its desperate hope for renewal.

Poll: Will you see Main Street?

A look at the Main Street behind-the-scenes crew and production team.

Production: What we know about Main Street

Main Street Release Date: When was it released?

Main Street was released in 2011 on Friday, September 9, 2011 (Limited release). There were 14 other movies released on the same date, including Warrior, Contagion and Bucky Larson: Born to Be a Star.