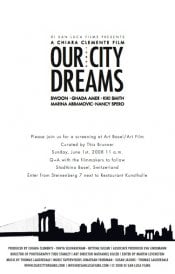 Filmed over the course of two years, "Our City Dreams" is an invitation to visit the creativespaces of five women artists, each of whom possesses her own energy, drive and passion. Thesewomen, who span different decades and represent diverse cultures, have one thing in commonbeyond making art: the city to which they have journeyed and now call home - New York.

Poll: Will you see Our City Dreams?

Crew and Production Credits: Who's making Our City Dreams?

A look at the Our City Dreams behind-the-scenes crew and production team.

Production Timeline: When did the Our City Dreams come together?

Our City Dreams Release Date: When was it released?

Our City Dreams was released in 2009 on Wednesday, February 4, 2009 There were 1 other movie released on the same date, including The Objective.

Looking for more information on Our City Dreams