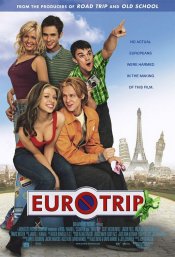 Scotty Thomas (Scott Mechlowicz) and his Berlin-based computer pen pal Mieke (Jessica Boehrs) have been writing each other for years, sharing every detail of their lives. When Mieke makes a cyber pass at Scotty, he completely freaks out, thinking that this guy he's known for years is coming on to him…in German no less. Too bad the the one detail Scotty doesn't seem to know is that, in Germany, Mieke is a girl's name.By the time Scotty figures out that Mieke is a girl, and a hot one at that, Mieke has cut off her email account and all contact with him. Thinking that this might be his one chance at true love—even though he's never actually met the girl—Scotty and his best friends, Cooper (Jacob Pitts) and the twins Jenny (Michelle Trachtenberg) and Jamie (Travis Wester), embark on a raucous trip across Europe headed for Berlin.Their trek takes them from London to Paris to Amsterdam and Eastern Europe, exposing them—literally—to every lascivious, larcenous and lecherous indulgence Europe has to offer, in a comedy that gives new meaning to the phrase "foreign relations."

Poll: Will you see Eurotrip?

A look at the Eurotrip behind-the-scenes crew and production team. The film's writer Alec Berg last wrote The Dictator and Dr. Seuss' The Cat in the Hat.

Production: What we know about Eurotrip

Eurotrip Release Date: When was it released?

Eurotrip was released in 2004 on Friday, February 20, 2004 (). There were 3 other movies released on the same date, including Clifford's Really Big Movie, Confessions of a Teenage Drama Queen and Crimson Gold.

Looking for more information on Eurotrip?