Connect to your destiny. 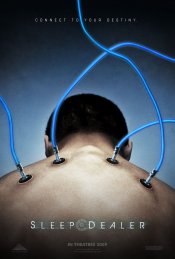 Set in a near-future, militarized world marked by closed borders, virtual labor and a global digital network that joins minds and experiences, three strangers risk their lives to connect with each other and break the barriers of technology.

Poll: Will you see Sleep Dealer?

A look at the Sleep Dealer behind-the-scenes crew and production team. The film's director Alex Rivera last directed A Contract With God.

This Is That Productions

Production: What we know about Sleep Dealer

Sleep Dealer Release Date: When was it released?