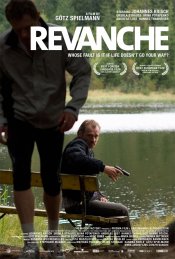 At once a gripping thriller and a tragic drama of nearly Greek proportions, "Revanche" is the stunning, Oscar–nominated, international breakthrough film from Austrian filmmaker Götz Spielmann. In a ragged section of Vienna, hardened ex-con Alex (the mesmerizing Johannes Krisch) works as an assistant in a brothel, where he falls for Ukrainian hooker Tamara (Irina Potapenko). Their desperate plans for escape unexpectedly intersect with the lives of a rural cop (Andreas Lust) and his seemingly content wife (Ursula Strauss). With meticulous, elegant direction, Spielmann creates a tense, existential, and surprising portrait of vengeance and redemption, and a journey into the darkest forest of human nature, in which violence and beauty exist side by side.

Poll: Will you see Revanche?

A look at the Revanche behind-the-scenes crew and production team.

Production: What we know about Revanche

Revanche Release Date: When was it released?

Revanche was released in 2009 on Friday, May 1, 2009 (). There were 9 other movies released on the same date, including X-Men Origins: Wolverine, Battle for Terra and Ghosts of Girlfriends Past.

Looking for more information on Revanche?