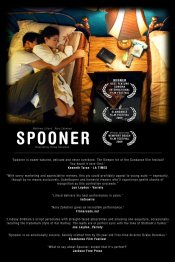 April 30, 2009 • Awaiting release by distributor; release date not yet announced.

Facing eviction from his parent's home on his 30th birthday, a socially awkward guy meets the girl of his dreams.

Poll: Will you see Spooner?

A look at the Spooner behind-the-scenes crew and production team. The film's director Drake Doremus last directed Zoe and Equals.

Production: What we know about Spooner

Spooner Release Date: When is it coming out?

Spooner is coming out To Be Announced (TBA).

Looking for more information on Spooner?